Announcing the arrival of "In Search Of The Fantastic" 2010 Remaster. This will become the new standard release, with the old master going into the archive. What's new here? No more 4 second minimum between tracks- the music starts (or continues) where it ought to; and superior EQ, which brings out richness and detail that surprised me and made me very happy. Why do it? The old master was not burning proper copies anymore, forcing me to go from burning on the stand-alone to the computer. Once in the digital studio format, there seemed to be no reason not to make these improvements. This is not an attempt to get people to buy the same thing twice: ANYONE WHO HAS A COPY OF THE ORIGINAL MAY CONTACT ME BY EMAIL FOR A FREE COPY OF THE REMASTER. (Please include "2010 remaster" somewhere in the subject heading.) Look for extended liner notes for the album in the very near future.

I've never been happy with the lack of inside cover on some of the pale series CDs, so I've now started correcting that. I have my customer lists and hope to be sending out the expanded covers as they become available. The first to receive the upgrade is "Adventures Of Forever And Nowhere". In this case there was so much I wanted to say about the ideas behind the titles that the inner cover is just text and some very minimal background coloring. I'm very excited to share this background story with people, and so I've posted it on the CD's page here.

The July CD by Eric Wallack "And A Few Friends" is now available, and includes the track "Transfiguration Of The Mekong Delta Blues", with Eric on acoustic guitar and me on pipa.

I've been building instruments and collecting cheap (but meaningful!) equipment too. The next work should have an even wider tonal palate than before. Still working on the tubular bells, haven't sprung for the other bars yet. I'm up to 8 now. Finished a kalimba, sounds good....Nearly done with a hand-made bow for bowing metal....Nearly done with a set of hanging jingly chime thingies....Have parts for a number of other instruments, I hope to have time to work on more soon.

Many years have passed since your vision came to me, and I think of you only as the moon speaks to the sea. OK, perhaps it's not that dramatic. (Poetic bit c/o the first Captain Beyond album.) But it has been exactly two months and I was really trying not to let things go that long. Some gen-yoo-wine news to report, well doggies!

We hired a sitter for a day so I could make some time to do a little recording. I did 3 CDs of improvised source material to send to Hyam Sosnow. Instruments included the ever popular 6 string electric geetar, mandolin, bowed device, electric sitar, 7-string electric....I think that's it, it's written down somewhere but I'm running on memory right now and I'd best get this up while the gettin's good. When last we spoke, he'd already been working with some of it, so...cool. You can read more news here as it happens...or two months after, what the hell. More happenin' , more updatin', less gratuitous use of folksy word truncation. 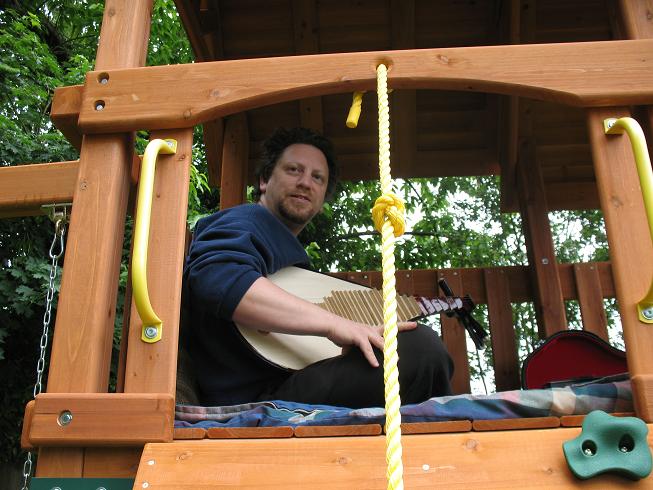 Not long after this, Chrissy managed to clear some time one morning for me to go out to Lulu's play structure (a two-story job) and record some p'ipa for Mr. Eric Wallack's July release, said bit to be featured as one duets track among a bevy of heavy friends duet tracks for one o' them type CDs where people do that. First I saw of it, it was from the inimitable Don Campau, who has done many; I've been meaning to do something like that ever since. At least I'm back to participating. Other (recorded and already sent) p'ipa pieces may end up on a planned- and sort of already underway- 2nd CD from me and the also inimitable Eric Wallack. (The first being, of course, Asleep Or Somewhere Else.)

I managed to get a little instrument-building work done, and although the thing itself (a set of tubular bells) is still underway, I'm much further ahead now (six bars to the previous two). The grand-sounding bells heard on previous Phantom Airship releases come from the excellent Roland SP20. I'd thought not having the full range of percussive options (among them subtle degrees of attack, manual muting, finger playing) wouldn't be a big deal with something as usually straightforward as tubular bells. I was wrong. I'd always liked the thought of them as a lead instrument (more ballsy than vibes, marimba or glockenspiel), but wasn't sure you could do much more than whack the notes. But when I had a couple of bars to experiment with (sawed down from one piece of cheap pipe), I found that there were some really wonderful subtleties to be brought out, and that they could be very expressive. I have also decided that I will most likely lay them out horizontally rather than hanging them. It seems like a better position to take advantage of the instrument's possibilities. These don't have caps, so they're best struck towards the middle. Also: bought some supplies to start making bows, but apparently not the correct cut of wood for the job, and me without a bandsaw or table saw. Said wood (some really nice maple) will now be used for necks.

Heh. Yeah. Another lengthy stretch between updates. Those of you following The Blog Of The Phantom Airship , however, know that various thoughts have been brewing and spewing forth like volcanic ash into cyberspace, but not nearly as disruptive as, say, the real thing into airspace. Chrissy has also posted a family-oriented blog, which most folks close to the airship already know, having been emailed the link. If you have mistaken one for the other- nope! Not the same! Radically different in fact. One has many pictures of a cute child and flowers; the other has a black background, white type, and lots of writing.

Hyam Sosnow and I had a conversation a couple of weeks ago, in which we discussed the possibility of a through-the-mail blind collaboration, where I would send him a bunch of raw material and he would construct something of it, along with his drumming. Timewise, it sounds like something I might be able to pull off. This was spurred by his recent creation of a work doing just this with multiple purchased (i.e., licensed) loops. I said hey, if you'd had stuff of mine to pull from, you could have used that. So we hope to get something like that going. 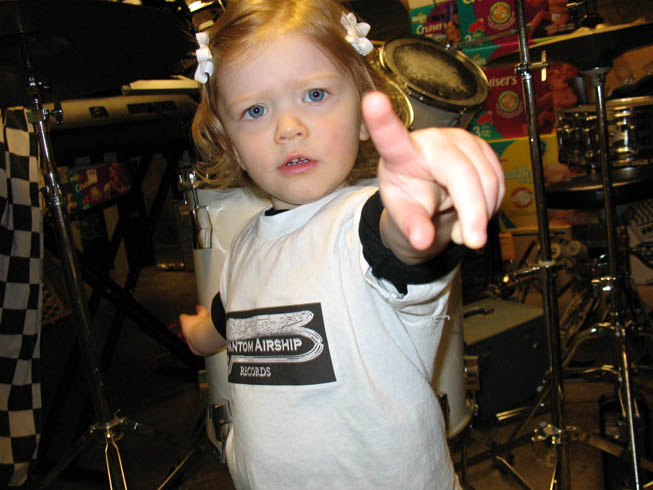 Whoa, watch out for that roadie, she looks mean!

It's time for another update, 'cause I haven't had one in a while. And that's just wrong.

As you can see we have a new shot of our poster girl on the front page, and of course here.

The Blog Of The Phantom Airship has actually been added to several times since its inception, and has even drawn a few dedicated readers brave enough to declare themselves as such. It's been a lot of fun so far and I look forward to continuing my electro-verbal spewage there for some time to come.

No takers on the trade offer yet. It's not just CDs I'm interested in; think of things you might put in a garage sale, or donate to a thrift store; used books, tools, cheap instruments, electronic parts, etc. My budget for such things, and my time to search, are just not what they used to be. I'm a rummage rat, it's one of my favorite passtimes...so much good junk, so little time... I should post a want list somewhere on this site.

Not much in the way of music-oriented activity recently, but I have been studying some and even found time to practice a little guitar. I've also been dipping into my music library and pulling out some gems: various Le Orme albums, Herbie Hancock (early 70s when his stuff had major teeth), Stravinsky, If, etc. Hopefully I'll get back to something more concrete to report on here, sometime in the near future.

Announcing the arrival of a less formal forum: The Blog Of The Phantom Airship. Like Porky in Wackyland, you may wish to regard the following: "It CAN happen here."

Sometime last year, I raised my prices, in keeping with the fact that every supplier I used was raising theirs. This happened to be just before the excrement collided with cooling system, and the US economy hit the skids. I left the prices raised, for a number of reasons. One, I had been told by others for a long time that by keeping my prices low, I was devaluing myself and my work, and as such, people were less likely to buy- "It's cheap, it can't be any good". I never quite bought that, but thought it that after many years, it was worth the experiment to try. Second, my costs hadn't dropped any. Third, I'd never really included anything like the value of my time or effort in the price. Fourth, we have lots of festivals and farmer's markets here in Portland, and it wasn't unusual to see people selling homemade product for about what I was then charging. But the times got tougher for everyone. People aren't going to buy CDs when they can't make their rent or their car payment. In keeping with this- and with my gut feeling that getting the music into open ears is the most important thing- I have dropped prices, in many cases below what they were originally. If you're interested, check it out.

Also, I want to offer the possibility of trades or barter. Want a CD, or a pack of CDs? Write me and tell me what you'd like to offer. I'm happy to swap CDs with musicians, and I'm open to other types of trade as well. The email is gregsegal@gregsegal.com . Be sure to put "trade for CDs" in the subject line of your email. It's not unusual for me to have 1500-1900 junk emails when I check that address, among them many that are addressed "hello" or something like that. That stuff gets dumped without being looked at.