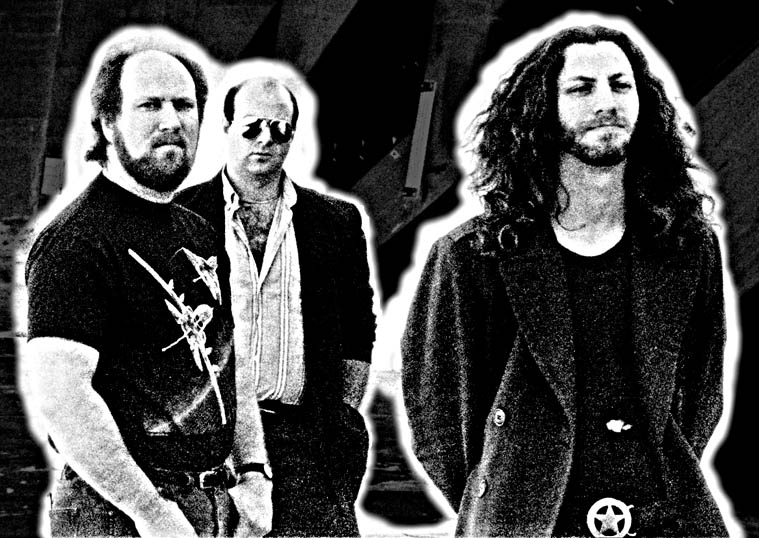 By 1988, Paper Bag had been going for 5 years. I had poured most of my energy into that, while continuing to record solo material, for which there was obviously no place in Paper Bag. I was starving for an outlet to perform my own compositions, and to play a certain kind of music which had been my ideal from the start- a kind of hybrid of blues-oriented hard rock, psychedelic, and progressive music. I saw no reason why a band couldn't sound like King Crimson, Pink Floyd, Led Zeppelin, Cream, and Tangerine Dream; why you couldn't have 2 minute pop songs mixed in with 20 minute improvisations; and why you couldn't draw influences from virtually any source and play them in your own style. (This is still my opinion.) Variety, color, texture, mood, atmosphere- I felt these things had really vanished from music and that it was about time to bring them back.

I advertised for musicians in a local paper and found someone who would become a staple of nearly all my live and band work outside Paper Bag : Hyam Sosnow, drummer extraordinaire. Hyam had made his living touring for 6 years and eventually retired from the scene in disgust at the hardship. He'd been playing from an early age and his playing suggested Ginger Baker, Simon Phillips , Buddy Rich and Jon Hiseman; and yet he sounded like none of these, having a well defined style, an unmistakable voice on his instrument. At the time I met Hyam, he'd been out of music for around 10 years, and he was itching to get back into something. As fate would have it, he found my ad and we've been working together since February of '88.

My original concept involved either a 3 piece or a 4 piece band, depending on whether or not we could find a keyboardist. Ideally I wanted an organist, but knew how difficult it would be to find anyone interested in playing this type of music, let alone have the talent to do it.

To my relief I was able to fill the bass role with George Radai, who agreed that it would be nice to play some composed material. And of course there would be some improvising going on as well. That was part of the plan from the beginning. I had hoped it would be the best of both worlds.

Unfortunately with everyone's hectic schedule, this proved a difficult band to take out live. We had a hard enough time just getting together to rehearse. We did a live radio set at KXLU for our first show, and that wasn't until late in the year. At that time we still hadn't come up with a name. We were tentatively called TFX; then Night Circus; and then, 5 minutes before airtime, we all discovered that no one had any objections to calling the band Cold Sky, after the song on Night Circus. (Ironically, we never played that song!)

The next show was February 8th at Be-Bop Records (CD now available), on what turned out to be the coldest night in many, many years in Los Angeles, possibly in L.A. history for that date- had there been enough moisture, it would have snowed. The turnout was abysmal but we got some good tape out of it, and some photos as well (one of which is posted here, as is the poster for the show- follow the link at the bottom of the page).

Musically, I think the 3 piece band succeeded in being a sonically rich heavy rock/prog crossover. Listening back to the recordings, we were clearly in the power trio mold but didn't sound like any power trio I've ever heard. All of the elements described above- hard blues rock, prog, space, avante garde and even fusion- were present and mixed together in a way I ultimately feel was right on target. At the time, however, I had a slightly more perfectionist view and it still seemed to me we were lacking something.

A thorough search through the tapes of the trio made two more CDs possible: "In Process" and "The King Of Illusion Variations". 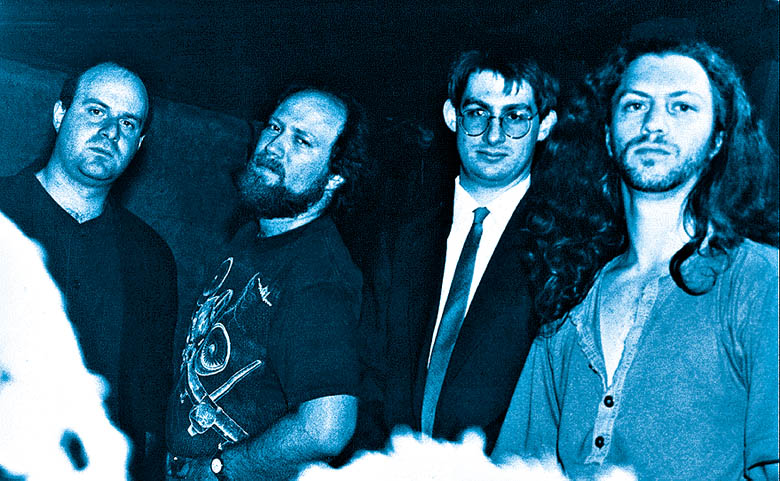 After the Be-Bop show we renewed our efforts to find a keyboardist. (Actually I'd probably never stopped- but now we got a bite, finally.) Enter Leon, manic note masher and maker of phenomenal mellotron samples. It turns out he'd advertised in the very same issue of the paper, looking for a similar band to ours; and we'd both spotted each other's ads. I knew we were on to something when, after he'd set up at the rehearsal space, we were both noodling on our instruments, warming up our fingers, but not listening to each other; suddenly we made a series of rapid chord changes together. We both looked at each other, pleasantly startled: yeah, this was gonna work.

Leon had really mastered the art of making a digital sampling keyboard sound genuinely like older analog keyboard instruments, making them sound properly warm and full bodied, giving them a tone which could cut through live. The digital keyboards of the time were notoriously thin, grating and gutless live (remember the DX7?), and I was skeptical about all of them until I heard Leon. And he specialized in organ, mellotron and mono-synth sounds. My only regret was that he didn't like using a piano sound. This seemed a minor sacrifice. One chord from his mellotron choir sample was usually enough to reduce Hyam and I to jelly.

The quartet's sound was much more in the progressive mold. You would automatically expect that with the addition of a keyboardist, but if you think of a player along the lines of Vincent Crane or Jon Lord, the picture is very different than if it was, say, Rick Wakeman or Tony Banks. Leon was definitely in the latter camp. (Nonetheless we shared a love of early BOC and Alice Cooper- along with Van Der Graaaf Generator!) George and Hyam both leaned much heavier towards prog than hard blues rock, so this tipped the scales pretty strongly in that direction. And Leon was permanently skewed towards the unexpected and the non-commercial- if he could substitute a diminished or augmented chord somewhere, that would usually be his first choice. We definitely sounded like a quartet- not a power trio with a keyboardist. The arrangements got changed to feature traded solos, expanded multi-part chord voicings, counterpoint and so on- we tried to open up all possibilities for having a skilled keyboardist on hand.

While the band's sound expanded noticeably, our ability to make time to rehearse and get out to play shows did not. Part of the fault was certainly mine, as I was not particularly agressive at doing the booking. But Hyam travelled as part of his job and was out of town a lot; Leon and George frequently had other things going on. It all should have been easier, considering that Paper Bag broke up in June of '89; this gave George and I both more time to contribute. But things continued to move slowly. And by this point there were constant clashes of very strong wills. Everybody wanted something different.

We did only two more shows (in 6 months!) before I finally lost my patience and disbanded Cold Sky. At that point we had been starting to make progress in different directions: we were trying to bring in songs from George and Leon, and to write songs together. The sound and approach of the band began to change into something very different than I'd originally intended. I believe the band (and my ego) could have weathered that just fine; but nobody in the band seemed really hungry to see it as a serious venture except me. Hyam and especially Leon were very clear with me that they did not want to go to a professional level, preferring to keep playing in a band as a hobby; and it seemed as though George had basically lost interest, to the point where, after coming to rehearsals progressively later, one night he simply didn't show up. I'd had enough. After what ended up being our last show, I called everyone and gave them the news.

My intention after this was to just go straight on to forming another band to play my material, and I began searching for other like-minded musicians immediately. (It was a search that produced no useful results.) But I did want to continue to make experimental music for fun with Hyam and Leon- the interplay and musicianship was just too good to throw out. The music would be instrumental, since I really wasn't interested in arguing about the merits of vocals anymore. (Hyam wasn't fond of vocals in general and hated most lyrics in particular; he didn't feel a song should be about anything, it should be pure music. This was hideous for me since even my instrumental stuff is usually about something! And he felt that a band usually became about the vocalist and the lyrics. He wanted no part of that.) By participating I was after some stress-free, rule-free fun.

And so, Hyam and Leon and I went into the rehearsal studio to jam and create some raw material from which we could fashion some instrumental music. Which brings us to S.O.S..........

Note: Some decent bootleg quality recordings are all that exist of Cold Sky. Though the songs are mostly taken from my solo efforts, in almost every case they are noticeably different from the studio versions. Most of them had the arrangements changed, with new sections added; what's more, there are obvious differences between the trio and quartet arrangements.

The tapes of the trio lineup have been thoroughly checked and have yielded 3 CDs: "Live at Be Bop Records 2/8/89" , "In Process", and "The King Of Illusion Variations".

There are current plans to release several CDs featuring the quartet lineup as well.