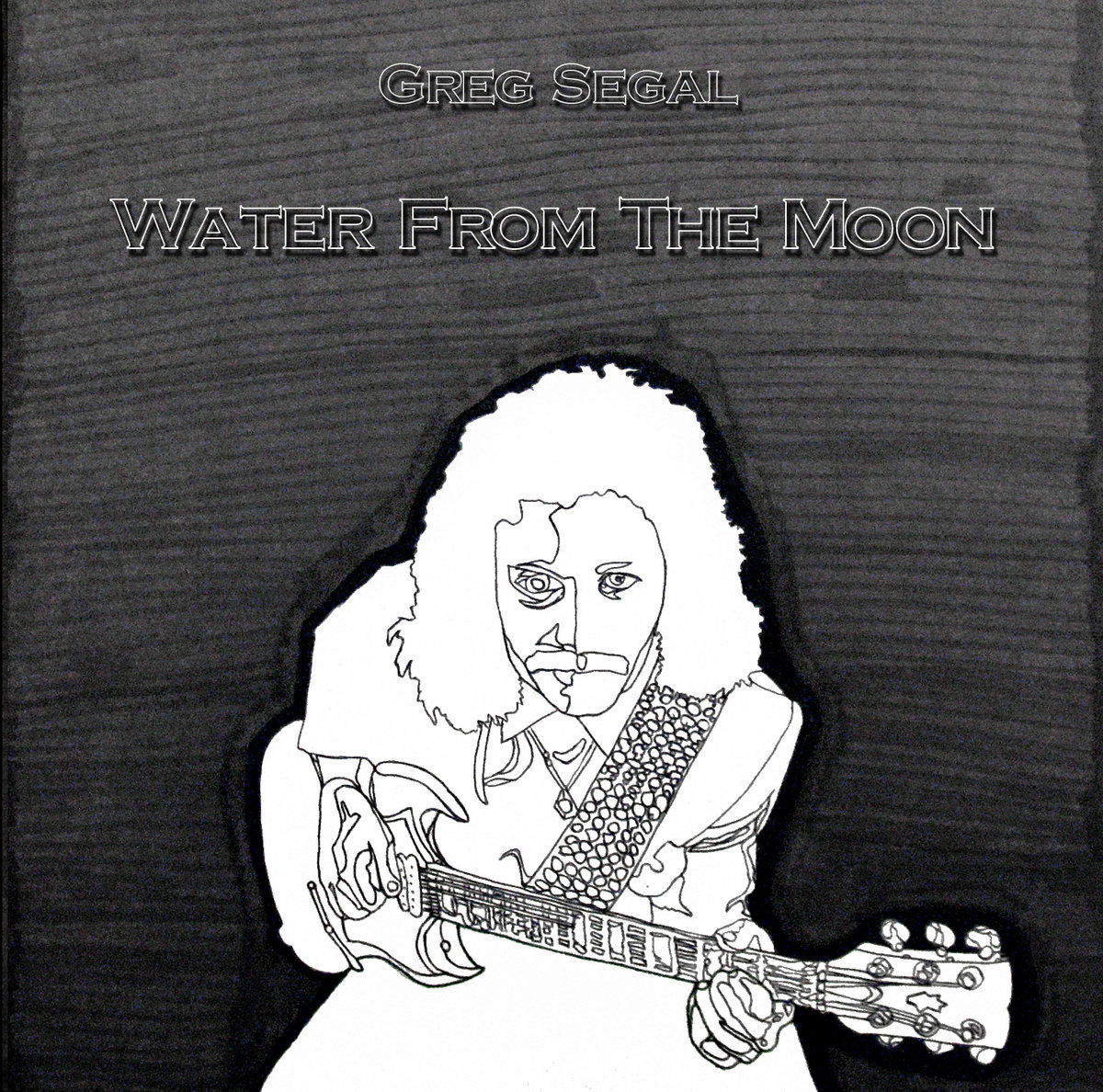 2. Nothing in the Dark That's Not There in the Light

4. My Soul Wants to Move South

6. The Rogue's Adventure in Dreamland

7. I Was Back in School Again

8. Water From the Moon

Most of these songs were based on dreams, and I wanted the music to reflect that. In imagining what I should shoot for before recording started, I thought of what to some might seem 3 very incongruous influences: the Syd Barrett solo records, the Bee Gees "First" and "Horizontal" albums, and the third Peter Gabriel record. All of them seemed to me to have a kind of quiet, weird, haunted quality, and that's what I wanted for this; unexpected access to some private world.

The end result is often a lot more dark-edged and sinister than these influences, with the possible exception of Gabriel, might at first suggest.

It's my opinion that the lyrics here take a quantum leap forward over previous efforts. Something must have clicked because I found my voice as a writer- I was no longer swimming in my influences and experimenting with popular styles. The first song here with lyrics, "Nothing in the Dark", is the most straight ahead. After that it's a whole 'nuther ball game.

Click on any underlined song to read the lyrics and/or see the instrumentation.

Nothing In The Dark That's Not There In The Light

Time to wake up and see what's around

Time to learn without a sound

Time to understand without second sight

Don't criticize me, you can't understand

What looking at life can do to a man

There's problems with us that surpass detection

Can't you understand, it's still all right

There's something to learn in every disease

I'll take my knowledge and do as I please

See the blood on the hands of those angels in white

Young boy and grandfather walking in the street

Toughs walking down the street

Tension in the street

The toughs pass, it's just another day

But the tensions is high

The invasion is here

Someone walking with us

A man I have seen before and think I know (my father?)

There is a splash and screaming metal

as his guts hit the ground

For a moment he stands with half a body

Then he falls back

and his head breaks the glass of a store window

and pools around his head

Staring up with lifeless eyes,

Haloed with broken glass and blood on tan tile

Things move fast and my grandfather takes me......

We are up in an apartment, hiding

Once I think there was more here

Things of comfort before the fear

Don't know who will survive but the end looks near

"These are bad days" says the old man to the boy

Who rises and looks out the second story window

He can remember how it used to be

The streets are quiet now,

with a few people moving around

Grandfather summons him to sit and starts to explain

"Just close your eyes and put your head in my lap."

Grandfather has a ceremonial knife

The boy knows what will happen now

And with his eyes closed he listens for the sound

The throat is cut, a soft wet ripping sound

No different than that of an animal

And the deed is done

The boy rises and looks at the old man's second mouth

The unnatural gash self inflicted

The old man's lifeless eyes staring up at the ceiling.

Now he was alone.

I walk the streets alone at night

Beneath the silent neon lights

There is no order

My conscience left me long ago

And I don't know just where it's gone

There's nothing in my way

I live to take your life tonight

I'd love to take your life tonight

As screams and terror fills your heart

Your death makes me a star

Now I'm on the nightly news

With your blood I've paid my dues

Your innocence and all your dreams

are buried in the grave

I'm killing you because it's fun

It could be you or anyone

I don't owe the world respect

And this is all I crave

I live to take your life tonight

I'd love to take your life tonight

As screams and terror fill your heart

Your death makes me a star

Now it's time to face the facts

Time to play the final act

This world is a catastrophe and order is a joke

If you live free you live with me

I suffer you to come to me

Or live under the yoke

Take one last look before you fall

To you the world is made of glass

To me it's made of stone

THE ROGUE'S ADVENTURES IN DREAMLAND (EXCERPT)

It was rush hour in the night club cafeteria

High atop the social tower

In the towering club

The elite danced the night away

To the pulse of the latest rage

Blood red was the light

It was a few hours before dawn

And night was not yet gone

When the chase began

As an emissary of the Dragon force

Was pursuing The Interloper

He who was not of the club

The rogue of many faces

He who owes no allegiance

And schemes only to escape

The night was full of dying possibilities

Full of changing air and excitement

Full of life, however dangerous and foul

The force of life crackled like static in the wind

The rogue pushed through the unseeing mass

Drugging themselves on the red-lit dance floor

Shoving the unaware aside

in his attempt to escape the law

Until the rogue pushed through at last

To the brightly lit hallway

Where the elevators led to offices,

But his pursuer was right behind

Dragon man could not cuff the rogue

But was pushed off balance

The elevator was called

And as the rogue disappeared towards freedom inside it

"I've tricked you", he called as the doors shut:

"That elevator is going down!"

But as the doors shut and the elevator roared up

Throwing him to the floor

He knew he had won anyway.

On the ground above

A strange sight awaited him

Naked, sprawled on the floor

The fresh dead had been positioned obscenely

In a last fling at wild passion

He picked his way through gingerly

Hoping to avoid stepping on anyone

In his head he heard their voices

they would feel pain if stepped upon

He had no wish to anger them

Though they seemed dead

Their social grope was important

They must go undisturbed

As it was the easiest way

to avoid arguments and confrontations

And he passed through the glass doors

to the condo project beyond

It was almost dawn but people treated it as dusk

Perhaps to some there was no difference

He roamed the empty facades

Conscious of the presence of the force of life

In so much empty space

The people were all in

But there was more life because of it

to those weary of their kind

Ahead in an upstairs window a light shined

In a typical middle class bedroom

Of a typical middle class girl

Ready to fuck and suck for the sake of rebellion

Ready to try anything once

A fellow searcher for the force of life

She snuck back in her room with her friend

Less attractive and somewhat more cynical than she

Perhaps they both were looking for a good time

He climbed up to her window

The Interloper once again

They did not seem surprised

They did not want to fuck

He had to get somewhere and he needed directions

From up here he could see better

They took him to the window and pointed

It was a club on the street shrouded in mist

from the damp morning

In the gray light it looked like a chateau

And he knew it was a chance, a battle in the war

And as he stared from her window

Sensing that victory could be near

Get ready for another adventure

Get ready for another fight

I WAS BACK IN SCHOOL AGAIN

I was back in school again

Getting ready to graduate

It wasn't my school

But if it was

I probably wouldn't go back

To people I never knew who are my close friends

To girls who I really did use to know

But want the chance to know me all over again

Always there in the back of my mind

And on waking I find

I am saddened that only in dreams

were these things truly real for me.

And every year around June

When it's time for some new class to graduate

I dream and I leave once again

Or I'm just back

Back with friends more real than those I left behind

Back in times more fun than the truth

What was the truth?

Moments out of time, we were as one

But imprisoned, unity was in cynicism

If the authorities didn't hound us,

we often hounded each other

It was no paradise

Even if I could go back, there's not much left behind

Just dreams of what we could have been

Had we not been so blind

I was back in school again

It was graduation day

Father was speaking on the phone, so many miles away

And as he spoke, a shower broke

and rain came pouring down

The room turned gray and the light grew dim

and my soul wore a frown

He spoke to me from the land of night,

where I was soon to go

To plunge full time into the night

to wrap my dreams in snow

He spoke of payments to be made,

appointments to be kept

Smalltimes coming down so hard,

was it he or I who slept?

I comforted him and said,

"Don't worry, for I will join you soon".

Hung up the phone and I walked to the edge

And I looked down through the gloom

There in summer rain so warm

my friends lay on the ground

along with my chances

The day will turn sunny and warm,

a day of pompousness and circumstances

And an audience of previous generations

Goodbyes will be said and the inmates released

To work out their lifetimes in night.

WATER FROM THE MOON

An end to war and hatred,

An end to need and want

A perfect life while living,

No memories that haunt

A span of years with no regrets

Or ways to fill them all

A world of spring and summertime,

An end to winter and fall

A time when all love is returned

And every promise true

A time when old age is a myth

And everyone is new

A time when everyone has food

And no one needs a car

A time when everyone is loved

For what they really are

And the world will change

With words and a tune

Water from the moon.

All songs/lyrics c 1987 by Greg Segal. All rights reserved.